This website is reader-supported. When you buy through links on our site, we may earn an affiliate commission.

If you’re looking for the best camera adapter for telescope, this short paragraph might be of assistance. According to the research we have performed on the matter, it appears that the Solomark 1.25-inch is the model you may have to take into account. On the one hand, this product is remarkably affordable when compared to many of its competitors. On the other, it’s convenient and versatile and can allow you to attach your SLR camera on one end and on the other, your telescope. Something that needs to be added in regards to this model is that you need an SLR or DSLR camera that comes with a T-ring. As it has been found to be compatible with refractors and reflectors, you might need to give some thought to this product. If the Solomark model is no longer available, maybe you should look at the specs of the Celestron 93625.

The Good
The Bad
Verdict
Price 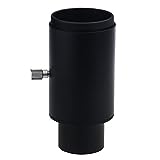 You will get more than what you’re paying for when you purchase this particular camera adapter for telescopes. For being budget-friendly, the unit surely has some great advantages. It offers the possibility to mount both DSLR and SLR cameras and it’s a great fit for any eyepieces, too. One thing you should know about this model is that high-quality materials were used in its making, granting it extra durability and performance.

You have to disassemble the eyepiece to fit the unit.

A sturdy camera adapter that will serve you for years.

As you might expect from something made by Celestron, this adapter is a good fit for any Celestron telescopes with 1.25-inch eyepieces. However, you should know that this adapter can be used for connecting any devices that have the same eyepiece style mentioned earlier. For all your photography needs, you will find that this model is an excellent option for mounting your camera, as long as you have the hardware needed.

It doesn’t seem to work with Newtonian telescopes.

An option for Celestron telescopes, but not only. 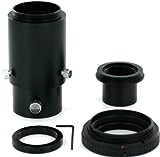 The first thing you should know about this particular model is that it is compatible only with the Sony NEX E-mount. That said, you should be aware of this aspect when you make a purchase, to avoid the hassle of having to return it. The parfocalizing ring the unit is equipped with can provide excellent convenience as it basically simplifies the way you handle magnification. As long as you need it for your setup, its performance seems flawless.

Its use is rather limited, given the requirements for the mount.

An adapter system that works with a specific mount.

Getting a camera adapter for your telescope can be a rather daunting task nowadays, especially as there are so many units to choose from. Besides, modern and newer alternatives come out every year, so you may have to take a step back and realize which one’s the right one for you, your telescope, and your camera. Take a look at the following buyer’s guide if you want to find out more and learn how to make an informed decision.

On the one hand, you need to make sure that the telescope eyepiece camera adapter you’re going to spend your cents on will be a good fit for the device you already own. Some models work great with reflectors and refractors whereas others are specifically designed for Schmidt-Cassegrain telescopes.

Aside from the type of telescope you own, you’ll need to make sure that the size of the barrel is a good fit for the adapter. While most of the ones we’ve come across fit 1.25-inch eyepieces, others, such as those that are developed for compound telescopes, fit barrels that measure 2 inches.

What camera do you own?

It’s safe to say that the convenient way of going about things would be to get a universal adapter that works with most cameras. However, this endeavor might not be as simple as you might have imagined it to be. There are some camera adapters that are specially designed to fit some mount or the other, and that largely depends on the model. For example, we’ve come across a plethora of units that are developed for Sony cameras, but others work with Canon or Nikon units.

Is a T-ring necessary or not?

While some adapters come with all the pieces that you might need in order to get the camera and the telescope up and running, others do not. In this particular case, for instance, you’ll have to make two separate purchases. You’ll have to buy the adapter and a T-ring.

Nevertheless, it’s worth adding that the design of some options is far more convenient than that of others in that everything will come pre-assembled. All you’ll have to do is slide the unit into the eyepiece holder.

What can the adapter do?

When it comes to functionality, most of the products we have come across in this line allow little to no adjustability. By contrast, some various choices we have stumbled upon allow variable magnification so that you’re capable of framing your pictures perfectly. It all comes down to your specific needs and requirements, in actuality, as this second choice might cost a pretty penny.

Usually, such adapters are made to fit one camera model alone. Therefore, they might be less convenient than others. Who knows when you’re going to lend your telescope to a buddy who also owns a camera and who doesn’t have the freedom to use it just because the adapter won’t work with it?

Look for consumer reports and consider your finances

One of the biggest parts of your research should involve reading some of the best telescope camera adapters reviews. Other buyers just like you can let you know what to expect, especially when it comes to using universal models. Some cheaper versions might not be able to meet your requirements, so you have to be a bit wary before ordering them.

As for the money-related issue, you and you alone can say what’s the most you’re willing to spend on such a product. While many universal adapters are priced under thirty dollars, some of those that fit a camera model can cost as much as one hundred dollars.

To make it somewhat easier for you to decide, we have put together a short list of some of the critically acclaimed models we were able to track down. Some of these choices are made to fit specific camera models whereas others are universal. Check them out if you have the time.

Even though it’s quite budget-friendly, this Solomark alternative manages to meet and even exceed the expectations of most users. In fact, we couldn’t help noticing that it has mostly received favorable feedback on the part of those who have bought it.

The product is a 1.25-inch camera adapter that can be used with DSLR and SLR cameras.

You’re supposed to attach the unit to one end of the telescope and on the other of the camera. In a nutshell, the Solomark model is a great fit for all eyepieces measuring 1.25 inches. Since the product has been designed using high-quality materials and not plastic, it’s perfectly capable of withstanding the test of time.

Most of those who were kind enough to write reviews in regards to performance and features of this option say that it offers more than enough value for the money. With that in mind, we suggest you have a look at its specs.

This model is a camera adapter for Celestron telescopes, but despite its description, it works with virtually any device that has been outfitted with a 1.25-inch eyepiece. To mount your camera onto the telescope, you need both a T-ring and a T-adapter, and this product is the second of the two.

On the one hand, you should consider the 93625 unit as it fits most camera bodies as long as you get the right T-ring.

On the other hand, if you have several telescopes, it’s very likely that you will be able to utilize the same adapter on all of them, provided that they aren’t compound models with larger eyepieces.

With the help of the Celestron 93625, you will be able to engage in some serious Prime Focus Photography. Something that needs to be added in regards to this model is that it doesn’t appear to be compatible with Newtonian reflectors, at least judging by the reviews it has garnered in this sense.

Unlike some of the other options we have described in this selection, the DNEX is a quite unique alternative. It doesn’t work with a variety of telescope eyepieces, nor is it a good fit for a broad array of cameras. It has been specifically designed to be compatible with the Sony NEX E-mount.

While the Modern Photonics DNEX is a good choice if you have a telescope that has been outfitted with a 1.25-inch eyepiece port, its specs are quite restrictive when it comes to the camera.

The so-called parfocalizing ring that the adapter has been equipped with allows you to match the focus point of your camera in order to simplify high power focusing.

Most of the individuals who have chosen this adapter seem to have nothing but good things to say about it. According to them, it’s solid, works perfectly, and can be set up in a matter of under five minutes.

As with other units we’ve talked about earlier on, this one from Meade Instruments seems to be designed with the needs of modern users in mind. The 07356 model is compatible with a wide array of telescopes that have been outfitted with barrels measuring 1.25 inches. It works both with reflectors and with refractors.

Some of those who have purchased this adapter say that you need to use a ladder or stool to facilitate looking through the viewfinder. Something that needs to be added is that you shouldn’t forget to enable the mirror lock on the camera you utilize.

Various other owners claim that the adapter is easy to install and can be uninstalled just as conveniently.

What this means for you is that you will be able to save some time that you would otherwise use for stargazing or astrophotography. All in all, this model seems like a safe bet.

Despite the fact that it is another reasonably priced choice, the SVBONY might prove to be worth its weight in gold. It works with most standard Canon EOS cameras and can be utilized successfully both with telescopes and with microscopes. As long as the eyepiece or barrel measures 1.25 inches, you’re good to go.

What seems to make the difference between this model and many of its competitors is its sturdy build. On the one hand, this detail guarantees that you will be able to use the adapter for a reasonable amount of time.

On the other, there won’t be any mishaps such as returning the unit to the manufacturer as it is backed by a lifetime warranty.

Based on the information that we have gathered, the T2 is relatively easy to utilize and does not advance any technical difficulties to people who might be less inclined to fiddle with all sorts of devices and gadgets all day long.

Ioana’s professional experience in the optics field has helped her understand the value of passing her knowledge forward. Her curious personality helps her gather useful information for her readers and her goal is to make technical information fun and accessible to everyone.